Ardabil or Ardebil is about 70 km from the Caspian Sea and 210 km from the city of Tabriz. It has an average altitude of 1263 MSL and a total area of 18,011 km². Neighboring the Caspian Sea and the Republic of Azarbaijan, this city is of great political and economical significance. The Province of Ardabil has been blessed with splendid historical attractions and natural beauty as it is located on the foothills of Mount Sabalan (4,811 m), which is famous for plenty of natural thermal spring water.

The province is believed to be as old as the Achamenid empire (ca. 550–330 BC). It is mentioned in the Avesta that prophet Zoroaster was born by the river Aras and wrote his book in the Sabalan Mountains. During Parthian era the city had a special importance among the cities of Azarbaijan region. Some Muslim historians attribute foundation of Ardabil to king Piruz I of Sassanid Empire. The Persian poet Ferdowsi also credits the foundation of the city to Piruz I. Ardabil suffered some damages caused by occasional raids of Hunsbetween 4th to 6th century AD. Piruz repaired those damages and fortified the city. Piruz made Ardabil the residence of provincial governor (Marzban) of Azarbaijan.

The word Ardabil is an Iranian word that has its roots in Avestan, which is derived from the word “Arta” (meaning holy, which has become “Ard” in Middle Persian and appears in words such as Ardeshir, Ardavan, Ardestan, Ardakan) and “Vill” meaning city. Composed.

What to See in Ardabil?

Ardabil, where we know for its souvenirs, handicrafts, hospitable people, despite its extraordinary potential for cultural attractions, sport tourism, health tourism, and health tourism is still one of the most unknown places in Iran for domestic tourists and foreigners. Here is a list of top places you can visit in Ardabil:

Sheikh Safi al-Din Khānegāh and Shrine Ensemble (Unesco World Heritage site since 2010) was built as a small city model consisting of bazaars, public baths, squares, religious buildings, houses, and offices. This splendid complex also known as Sheikh Safi‘s Mausoleum, ranks among the finest historical achievements of Iranian art. Sheikh Safi was a grate Iranian Sufi who lived in 13th and 14th century. He was grandfather of Shah Ismail I, the founder of Safavid dynasty ( 1501 to 1736).

Sheikh Safi Ardabili
Safī al-Dīn, (1253-1334, Ardabil) is mystic and founder of the Ṣafavī order of Sufi mysticism. Safī al-Dīn, was a descendant of Firuz Shah, a ruler of Kurdistan Region. He obtained his early education in Ardabil, where his family may have held dependencies as a land grant from the central government. Later, he moved to Shiraz, where he was influenced by mystical teachings for the first time. He then traveled to Gilan (the Iranian Caspian region), where he spent twenty five years as a disciple of a spiritual leader called Sheikh Zahid, whose daughter he married. After a dispute over the rightful successor to Sheikh Zāhid, Ṣafī al-Dīn returned to Ardabīl, where he formed the Ṣafavī order. Sheikh Safi was the eponymous ancestor of the Safavid dynasty, that ruled Iran from 1501 to 1736.

The predecessors of the Safavid kings as well as Shah Ismail I; The founders of this dynasty are buried in this historical complex. A dome was built on the tomb of King Ismail, and five swords were mounted on top of the dome to symbolize the weapons of the families who helped Ismail reach the throne.

The tombs are surrounded by finely engraved wooden boxes with extraordinarily delicate ivory and precious metal inlays. Apart from the tomb itself, the construction of the main portal and three domes decorated with exquisite faience tile give considerable charm and splendor to this attractive historical monument. The decorative elements of the complex, both internal and external, consist of paintings, plaster, moldings, stuccos, and gold-toned stalactite decorations. The Sheikh Safi’s grave is located exactly were his old Khanegah was located once.

What is a Khanegah?
A Khanegah or khanqah or khaniqah is a Persian word meaning a house or abode of Sufis and dervishes. Also known as a ribat, it is a building designed specifically for rituals and gatherings of a Sufi brotherhood. Khanegah is a place for spiritual retreat and character reformation. They are very often found adjoined to Dargahs (shrines of Sufi saints) and Turbats (tombs of notables), mosques and madrasas. Khanegah seems to have started appearing in Khurasan and Transoxiana in the 10th century as centers of prayers as well as of teaching on various aspects. 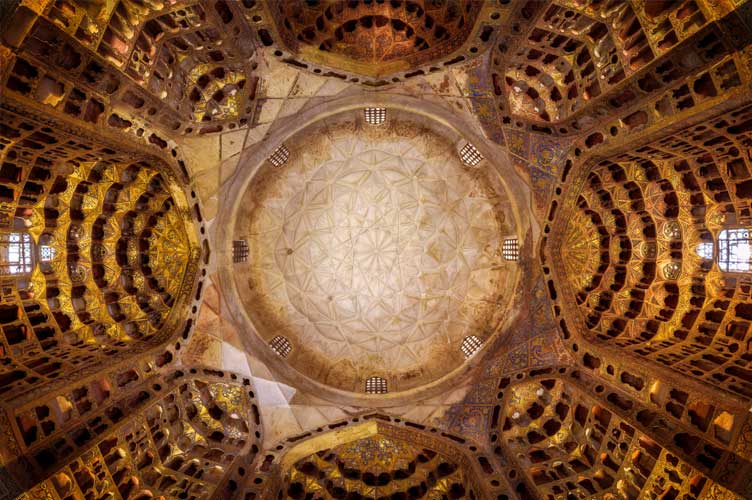 Chini Khana (or Chini Khaneh) is one of the most beautiful halls of Sheikh Safi complex. This hall was designed by Sheikh Bahai more than 400 years ago. This hall is located in the eastern part of Sheikh Safi al-Din shrine, which has four porches and arches of beautiful and exquisite plaster decorations.

The structure of this hall has an extraordinary strength that even the occurrence of an earthquake with a magnitude of 7.2 had no effect on it. Chini Khana has 1256 compartments, all of which contained porcelain objects donated by the Chinese emperor to Shah Abbas I in occasion of revitalization of the Silk Road.

Ardabil Friday Mosque is located in Pir-Shamsodin neighborhood of Ardabil. According to sources, this mosque, which was built during the Seljuk period, was used until the early Safavid period (16th C) . Although the mosque was badly damaged during the Mongol invasion, it was restored during the Ilkhanid period. It seems that what caused most of the mosque to be destroyed was an earthquake in this area.

This historical monument is located next to a fire temple dating back to the Parthian period. The original Seljuk structure of the mosque, which originally was a part of the fire temple, included a magnificent court yard, porch and arch, was destroyed in the Mongol invasion in 1223 and around the year 1252 has been rebuilt. Currently, the main building of the mosque has been destroyed and only a part of it remains.

The original building has now been almost destroyed and what remains is only the dome and porch of the Grand Mosque. Although the mosque dates back to the Seljuk period, its architecture is very different from the Seljuk period architecture in the sense that the mosques of the Seljuk period were often based on four-Iwan plan, but not this one. Ardabil Friday Mosque, whose main structure is made of bricks, consists of three parts. The first part of the mosque is the base of a minaret, which is located a short distance from the mosque. There is an inscription on the body of the minaret that has nothing to do with the mosque and the way it is placed on the minaret shows that it was brought from another place and fixed on the minaret. The second part of the mosque called Tirpush, is 8 by 15 m. It is a hall with 9 wooden pillars based on irregular stone bases. 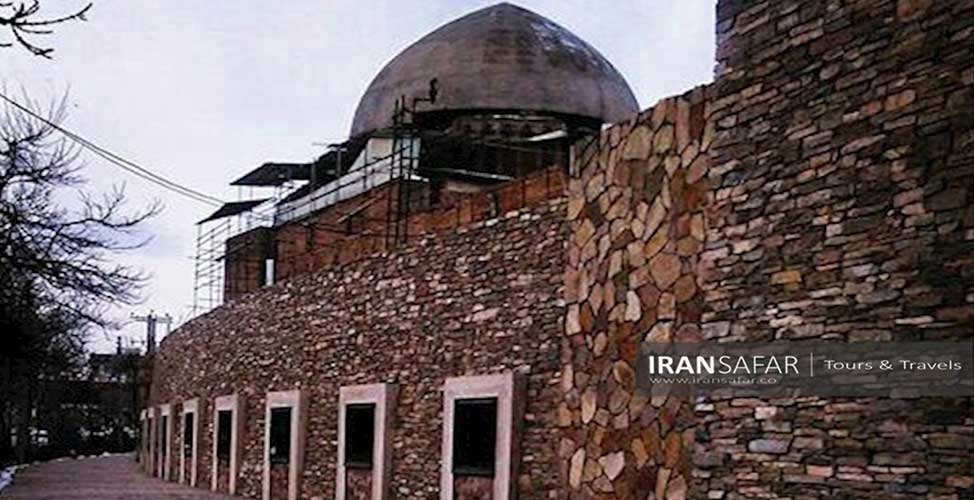 The Iranians have long shown their great interest in the therapeutic aspects of natural hot water. In addition to the kings who built recreation centers on the banks of the springs, the Iranian people viewed the hot springs from a religious and divine point of view. According to Iranian myth, these springs are protected by divine forces and therefore have supernatural healing effects. Moreover, the great Iranian scientists, including Avicenna, were interested in the nature and the medical virtues of thermal waters.

Since Iran is located in a mountainous and volcanic area, it is home to many hot springs that are scattered all over the country. The most important springs of Iran are located on the slopes of Mount Damavand (in the north of the country) and Mount Sabalan (in the north-west of the country). Currently, there are nearly 370 hot springs in Iran, most of them are in West Azerbaijan, Mazandaran and Ardabil.

Almost 25 km from the city of Ardabil, the hot springs of Sarein, including Gâvmish Goli, Ghotor-Soui (old water), Sâri-Soui (yellow water) attract large numbers of visitors. There are also two baths of sparkling natural water that have medical benefits. These two natural baths located in the valley of Vilâ 5 km from Sar’ein, offer an extraordinary natural landscape. In addition, the springs of Isti-sou has lengthened along the Ardebil-Khalhkal road which is one of the most beautiful roads in the country. The warm waters of Sar’ein have uneven therapeutic properties.

Mt. Sabalan
Sabalan ( 4811m ) is the third highest peak in Iran after Damavand ( 5610m ) and Alam-kuh (4851m ). This dormant volcano mountain is famous for it’s amazing crater lake on the summit ! The mountain is located in Ardabil province. Sabalan is a heaven for nature lovers because of its natural hot springs, beautiful summer nature, a crater lake at the top of the mountain. Also, since all the peaks of Sabalan are covered with ice and permanent snow all year round, there is a ski slope called ” Alvars”. The normal route to summit requires a moderate fitness level.

Meshgin shahr suspension bridge is the tallest and the longest bridge of the kind in the Middle East. This bridge which is over a river and a green valley feels very different from all other bridges, a feeling mixed with excitement, fear and pleasure, especially when you are on its glass part watching the roaring river and the amazing beautiful nature underneath.
Its length of the bridge reminds you the number of days of the year; 365 meters and its 2 meters wide. Meshgin shahr bridge is designed in 2014 by an Iranian Architect who inspired it from Capilano Bridge in Vancouver, Canada.

What to eat in Ardabil?

A long list of traditional and local dishes are cooked in Ardabil province, each of which has its roots in the history and culture of this region. Ardabil is almost mountainous with a cold climate and that is why hot Aush (vegetable soups) are of the most popular dishes. Dried fruits are widely used as ingredients in Ardabil cuisine and increase their nutritional properties. An important part of Ardabil traditional food is prepared with a combination of flour, butter and sugar and due to its high calorie content, it is a suitable food in the cold seasons of the year.

Fruit Aush or soup is one of the special dishes in the region of Azerbaijan, especially in Ardabil province. This Aush (Aash) is cooked with red beans, peas, lentils, rice, peeled wheat, noodles, minced meat, plums, yellow plums, apricots, Dried cherries, black tomatoes and vegetables such as leeks, parsley, coriander and beet leaves. This soup has a very high nutritional value and due to having a variety of dried fruits, it is considered a light food and also cleanses the digestive system.

Another local and traditional dish from Ardabil province that is made with special skill. The sour taste of wild plum in this food is intoxicating; that’s why it is called Turshi Qurma meaning the sour stew. High nutritional value materials such as fruits, meat and beans are used in Ardabil Qurma and it is served with rice vegetables and yogurt. 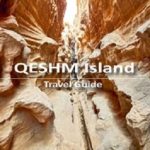 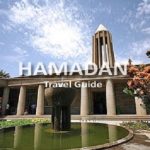 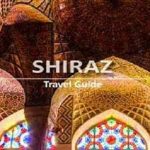 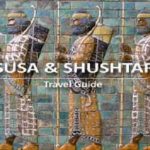 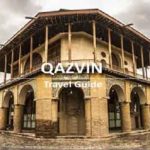 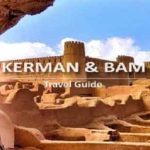